Canada recently witnessed severe flooding with some river flows reporting their highest on record.  Whether this is becoming the norm or not following recent flood-rich years, delivering effective multi-hazard early warning systems is vital for enabling communities being prepared for future events.  The Sendai Framework for Disaster Risk Reduction, which was endorsed by the United Nations, encourages government agencies to support improved and effective early warning systems. So, how are agencies responding to such challenges of early warning for increased natural hazards?

A man fixes a hose connected to a pump at his flooded house on Ile Bizard, Que., near Montreal, Monday, May 8, 2017. Source: Paul Chiasson/The Canadian Press

The European Geosciences Union General Assembly which took place between 23rd and 28th April in Vienna, was an opportunity to share progress and innovations in the field of forecasting and warning systems.  One PICO session brought together presentations on real-world case studies of system implementations, configured at local, regional, and national scales.

Various approaches to flood outlooks were presented.  Pilling presented new methods for providing flood risk guidance for the month ahead in England and Wales which have been developed in response to the Winter 2015/16 floods. Thiemig presented the latest developments with the European Flood Awareness System (EFAS) which include seasonal outlooks, event hazard mapping and rapid risk assessments.

For those that have no experience of running an operational flood forecasting system, the opportunity was provided to test yourself through the interactive game for pathways to designing and running an operational ﬂood forecasting system.  This follows a series of interactive games developed by the HEPEX community over recent years at the EGU General Assembly. 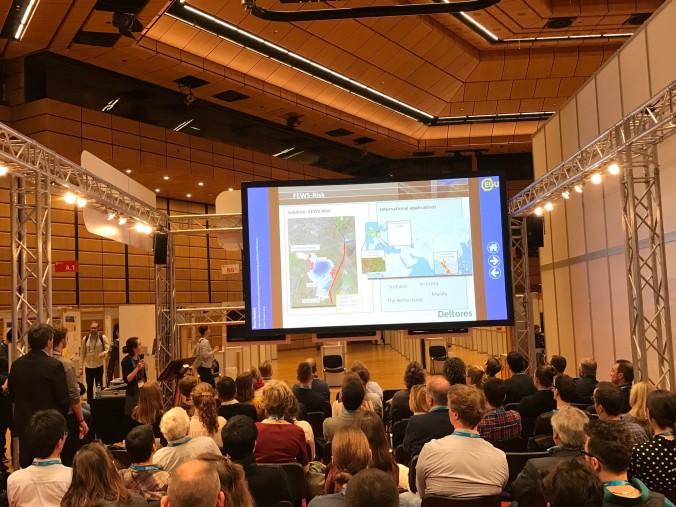 Away from the PICO session, several other talks provided some insights into global approaches in flood forecasting.  Demargne presented work in France on hydrologic ensembles based on convection-permitting precipitation nowcasts for ﬂash ﬂood warning.  The new system, called Vigicrues Flash, follows major flooding which occurred in France in 2010 resulting in 24 casualties and 1350 people being evacuated.  Parry presented work on data availability, limitations, and the impact of observational uncertainty for operational flood forecasting in Scotland. Finally, Dottori gave an interesting talk on satellites, tweets, forecasts and the future of ﬂood disaster management where the use of social media is being trialled to verify flood forecasting where no data exists.

For more information on our EGU presentation on research with the University of Dundee and SEPA, please read the recent HEPEX article on ‘public perceptions of flood warnings in Scotland‘.